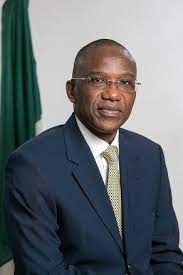 The Managing Director/Chief Executive Officer of Asset Management Corporation of Nigeria (AMCON), Mr Ahmed Lawan Kuru, has condoled with the President of the Court of Appeal, Justice Monica Dongban-Mensem, over the loss of her son, Prince Paeke Dongban.

The AMCON MD/CEO described the death of the young mathematician, who until his passage worked with the Federal Ministry of Transport, as sorrowful.

Kuru in the condolence letter said, “With sorrow in my heart but in total submission to the will of God, I wish to, on behalf of the Management and Staff of Asset Management Corporation of Nigeria (AMCON), express my sincere sympathy to you over the passing on of your son, Prince Paeke Shapnaan Dongban.

“Knowing that nothing compares to the pain of losing a child, especially one as sound and promising as Prince Paeke, we stand with you in your grief and pray that God grants you and your family the strength, and courage to go through this dark, and difficult phase.

“Having led a good life, our desire is that the Almighty God grants Prince Paeke eternal rest, comfort your family, and all staff of the Federal Ministry of Transport, as we all bear this irreparable loss.”

Prince Paeke, second son of Justice Dongban-Mensem, died in his sleep in the early hours of Saturday, July 23 at the age of 38.

He studied Mathematics at the Federal University of Technology, Minna, Niger State, and was an official of the Federal Ministry of Transportation in Lagos.

His death occurred 11 years after the passing of the first son of the jurist, Kwapda’as Rangna’an Samson Dongban, who was killed by a hit and run driver in Jos, Plateau State capital, in 2011.

The judge had set up the Kwapda’as Road Safety Demand Foundation in honour of her first son.