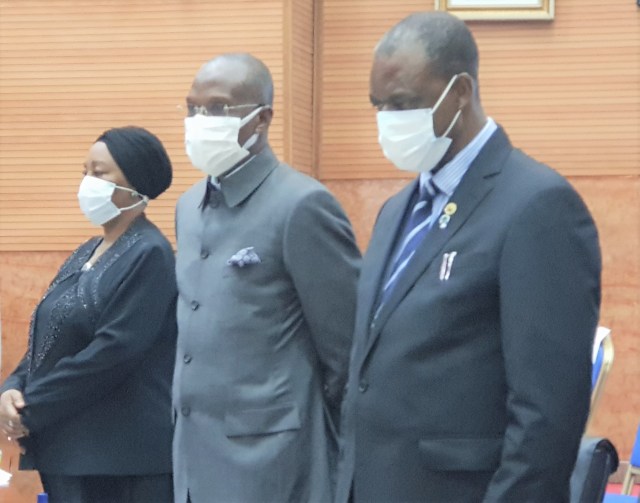 If the country really wants to recover the N4.4trillion outstanding debt burden currently shouldered on its behalf by Asset Management Corporation of Nigeria (AMCON), then the role of the judiciary in the execution of AMCON mandate, and also the financial stability of the economy cannot be over emphasized as it plays major role in making key recoveries possible against varying odds using the mechanism of adjudication.

According to Abdullahi looking at the huge outstanding debt burden of AMCON, the critical role the Corporation plays in the financial sector, and the resistance the agency is facing especially from obligors in the recovery drive, the judiciary cannot afford to be lax or take a back seat approach to the issue but must strive to do its best in executing its responsibility actively with passion and vigour.

The NJI Administrator added that the feedback received over the years has gone a long way in improving the debt recovery efficiency of AMCON through the different amendments to the AMCON Act. These amendments to the principal instrument in 2015, 2019 made it possible for the Corporation to enjoy some special powers that are fortified with the 2020 AMCON Rules at the Federal High Court.

In his own remark, Hon. Justice J.T. Tsoho, the Chief Judge of the Federal High Court who said he was in tandem with the position of the NJI Administrator said it was because the Federal High Court recognized the strategic importance of the AMCON assignment that the Judiciary in the country has been very supportive of AMCON’s recovery activities especially with the very many cases AMCON has in the courts.

He stated: “AMCON is indispensable to stability of the financial system and the real economy by offloading toxic assets of banks. As a child of necessity, the Corporation has a terminal date that is fast approaching. It is in recognition of the peculiarities of AMCON that I constituted

“I believe that these prescriptions will ensure the contextual interpretation and expedient realization of the AMCON mandate as captured in various amendments to the AMCON Act. I also hasten to add that all of us are encouraged to fast track the hearing and determination of AMCON matters before us. Certainly, the significance of the Corporation to the Nigerian Financial System Stability was critical to my decision to integrate them into our 2021 Annual Legal Year.”

In his own contribution, Managing Director/Chief Executive Officer of Asset Management Corporation of Nigeria (AMCON), Mr Ahmed Lawan Kuru while thanking the Honourable Chief Judge of the Federal High Court, Justice J.T Tsoho for the opportunity to be at this gathering said the interaction is coming at very important and critical time when the Corporation is reviewing its strategy towards sunset and when the Honouurable Chief Judge has constituted an AMCON task force.

Kuru said the gesture will not only help speed up the time with which AMCON cases are heard and determined, but also assist the Corporation in achieving its mandate prior sunset date, which is fast approaching, adding that AMCON most grateful to my Lords from various divisions who always find time to attend the interactive sessions despite their tight schedules.

The AMCON boss added that there was need for speed and strategy especially from the Judiciary as far as handling the AMCON matters because the total current exposure on all Eligible Bank Assets (EBAs) in the portfolio of AMCON stands at N4.4 trillion. Of this huge sum, he explained that only 350 outstanding obligors account for 83% of the total EBA balance; 244 of the top 350 obligors are in various courts while the collateral coverage is only 16% of the total current exposure.

Additionally he said: “As AMCON gradually approach its sunset date, we need to reemphasize our position and your Lordships support as we hope to deliver on this National assignment. My Lords, AMCON success is largely dependent on the Judiciary. We still have many cases pending with the various divisions of the courts. These matters are very vital to the success of the Corporation and particularly as we know that if we are unable to resolve them, it becomes a burden on our country’s debt profile and taxpayer’s money.

“With the help of the Judiciary AMCON has been able to make notable progress especially in enforcement. Granting of Exparte Orders (EOs) has compelled most recalcitrant obligors to come to the negotiation table. We have repeatedly made the point at every opportunity that all stakeholders must view the AMCON mandate as one of serious national importance. If at sunset AMCON is unable to recover the huge debt of over N4.4trillion, it becomes the debt of the Federal Government of Nigeria for which taxpayers’ monies will be used to settle.”

“The implication is that the general public will be made to pay for the recklessness of only a few individuals who continue to take advantage of the loopholes in our laws to escape their moral and legal obligations to repay their debts. We should not allow a few individuals to escape with our commonwealth. And we want to do it within the confines of the law,” the AMCON boss stated.